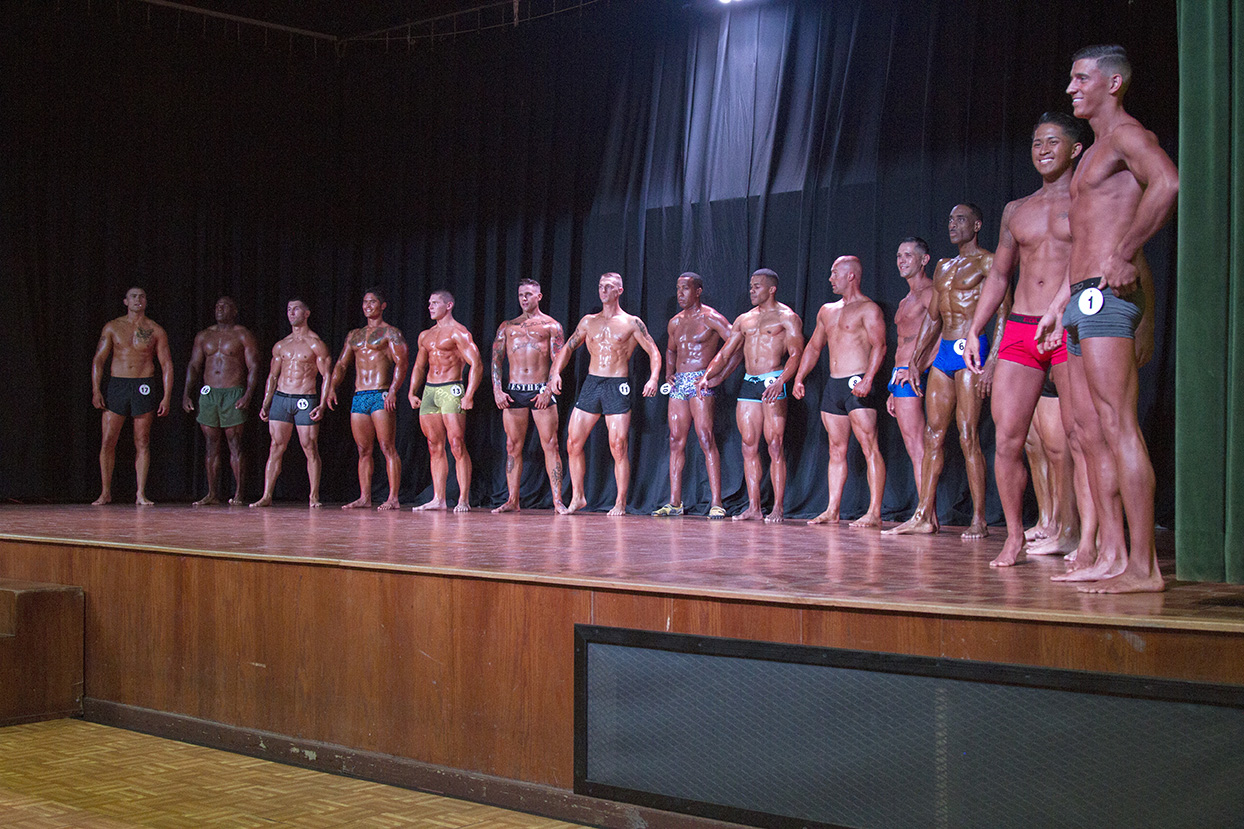 GUANTANAMO BAY, Cuba – A mass of spectators flooded into the Windjammer ballroom Saturday night to support 21 male and female competitors in this year’s first Morale, Welfare and Recreation Fitness and Figure Competition.

Spectators squeezed into the ballroom wherever possible to watch as competitors posed and performed on stage, competing in a hybrid event, and showing off their hard earned results.

The competition has been held yearly, since 2011, until 2014 when, due to popular demand, it became a bi-annual event. Excitement was displayed not only by the size and interaction of the crowd, but by the smiles, laughs and cheers – the likes of which you may only otherwise experience during live concerts.

“We had such great feedback from people asking us to do another one, so we did. The response from the participants and spectators was great,” said Roxy Bumpus, the MWR fitness specialist and competition coordinator. “This [competition] is really good for all active duty or civilians who spend a lot of time at the gym and like to make themselves a physical goal, and this is something that … inspires them to get in better shape.”

Seventeen males and four females competed in two events. The fitness portion allowed contestants four 30-second, one quarter turn poses, where they’re given points, per turn, on their physical appearance, muscle beauty, symmetry and muscle balance. The figure portion allowed contestants another 90 seconds to show off their personality by dancing, doing stunts, posing creatively or performing acts. For some, this was their first time, and they had to overcome the fear of showing off their bodies in front of such a large crowd.

“I started working with an online trainer [who] trains girls for bikini competitions back home, and I’m deathly afraid of crowds,” said Tracy Smith, overall winner in the female category. “So I said, ‘this would be a good experience for me before I go and do one back home.’ So, I joined the competition here.”

Some contestants previously competed in similar events, not only at GTMO, but back in the states as well. So, they knew what to expect and were more comfortable during the competition.

“This is probably my fourth or fifth [competition]. I’ve done two in the states and two here – and then another one way long before that,” said Clarence Ross, the most seasoned competitor at age 56 and overall winner in the men’s category. “They had better trophies this year. They had more competitors this time. It was more organized, and the judges were better this time too. So, it turned out really well. The MWR did an excellent job.”

All of the competitors were praised throughout the event by the cheering crowd. Even during awkward audio technicalities, the crowd cheered to help put the contestants at ease and give them confidence to continue their acts.

“All the people that supported me were optimistic, ‘You got this. You’re 56 years old.’ That’s an achievement in itself, to come out here against these young guys,” Ross said. “The people that supported me were behind me with my diet, my exercising and motivating me to say, ‘You can still do it,’ because the diet is the hardest part. Sometimes you want to cheat, but cheating will make you fat. It’ll show when you’re standing on stage.”

At the end of the night, groups of supporters and friends crowded around the contestants to take group pictures and, of course, selfies, helping celebrate each contestant’s personal victory.

“I’m going to compete when I get back to the states, but I won’t compete at the weight I came in now, at 170,” Ross said, “I’ll put the 20 pounds back on that I lost to get in this weight class, and compete at a higher weight class when I get home.”

Making high-level fitness a long term goal is inarguably a test of enduring willpower, and showing off your hard work on stage can test your will. Sometimes all that’s needed is a little support, propelling you further than you’ve ever
dreamed.

“It felt really awesome [to win first place]. I worked really hard to get where I’m at, and I’m really proud of myself for how far I’ve come,” Smith said. “I’m going to do a bikini competition back home, not a figure competition. I don’t think I have quite enough muscle yet for a figure competition.” 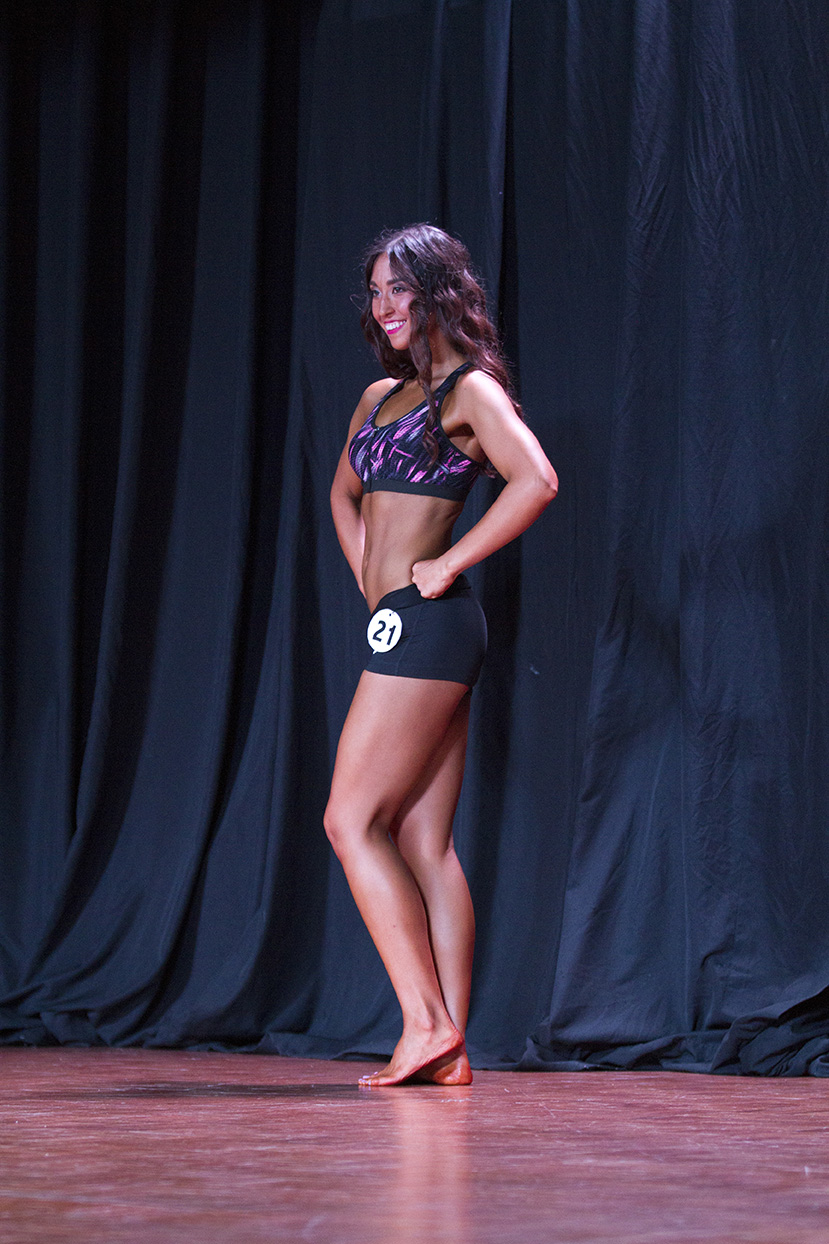 Contestant No. 21, Tracy Smith, poses for the judges and hundreds of spectators during her fitness routine at the Morale, Welfare and Recreation Bi-annual Fitness and Figure Competition May 30, 2015 at U.S. Naval Station Guantanamo Bay, Cuba. (Photo by U.S. Army Sgt. Richard W. Hoppe/Released) 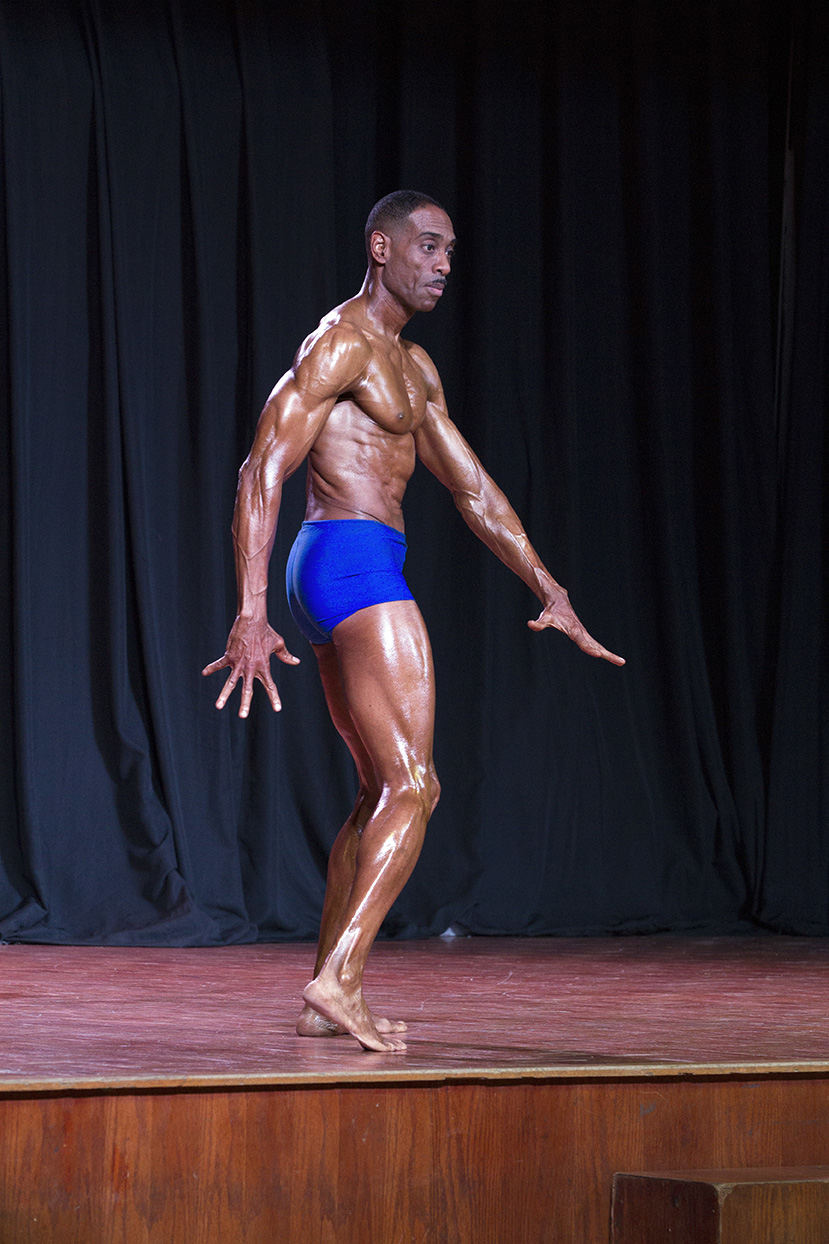 Contestant No. 6, Clarence Ross, makes a quarter turn pose for the judges and hundreds of spectators during his fitness routine at the Morale, Welfare and Recreation Bi-annual Fitness and Figure Competition May 30, 2015 at U.S. Naval Station Guantanamo Bay, Cuba. (Photo by U.S. Army Sgt. Richard W. Hoppe/Released) 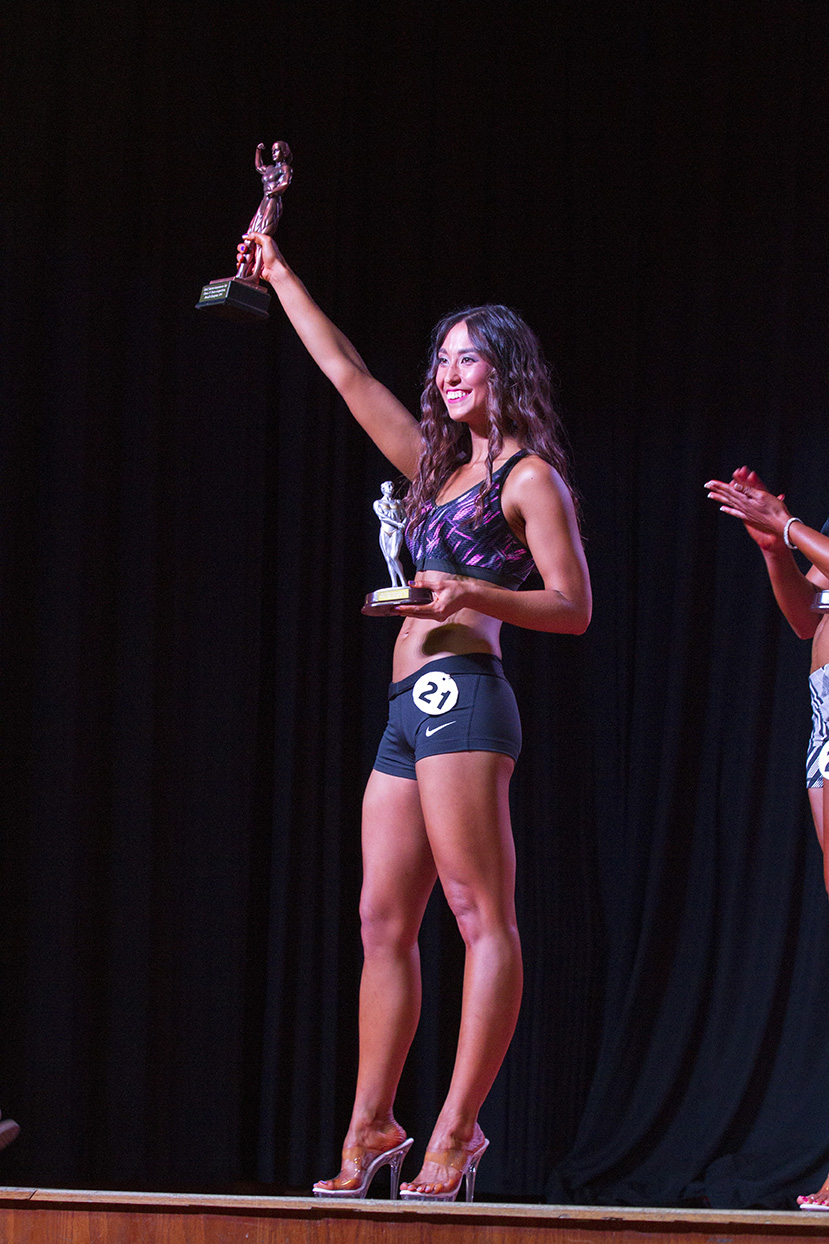 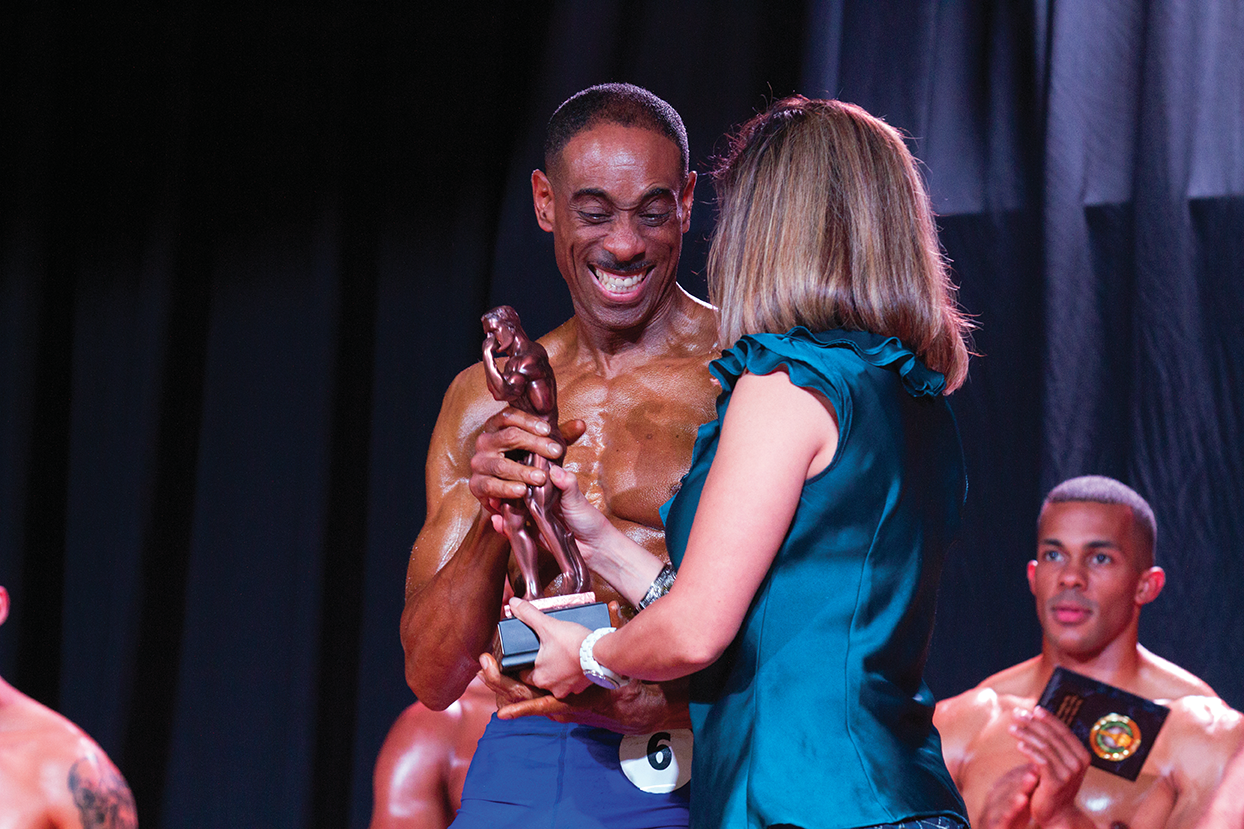 Clarence Ross, 56, accepts the trophy for first place overall after beating out competitors half his age at the Morale, Welfare and Recreation Bi-annual Fitness and Figure Competition in the Windjammer ballroom May 30, 2015 at U.S. Naval Station Guantanamo Bay, Cuba. Ross, who has competed in several other fitness events, here and stateside, plans to continue competing when he gets back home. (Photo by U.S. Army Sgt. Richard W. Hoppe/Released)

Posted on May 30, 2015 in Journalism, Photography, Portfolio

Back in The Saddle Again
Portfolio: Red Dress Run